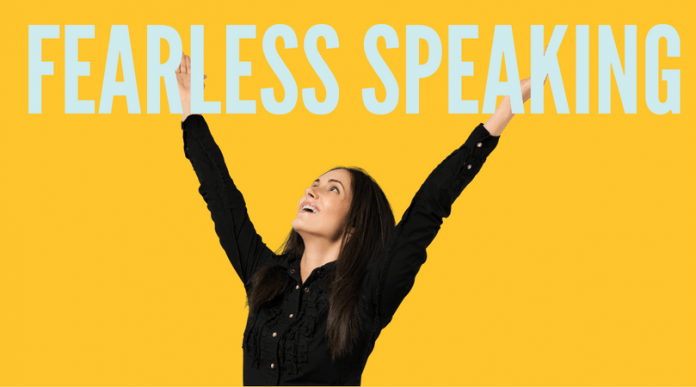 Many years ago a student told me that she got sick with nerves every time she gave a presentation in my class. Her story was news to me because she was a good speaker, and I never sensed any anxiety from her. This is a valuable lesson: you may never conquer your fear of public speaking, but you can productively manage that fear. Managing anxiety is the focus of my approach to dealing with a fear of public speaking. It focuses on three principle tactics: hide, minimize, and utilize your fear.

Before I get into those tactics, it is important that you understand the nature and implications of your fear of public speaking. Understanding speech anxiety will help you manage it.

Why do you have a fear of public speaking?

I ask every public speaking class for the source of their fear of public speaking. With little variation, I get the same three responses. First, people are scared of embarrassing themselves. They worry about making a mistake, and the fear of dealing with an error causes anxiety. Second, people fear attention. Many people do not like being the center of attention – of having all eyes on them. Maybe they are insecure about their appearance, or voice, or other insecurity. Or maybe they are afraid the audience won’t like them. I conceptualize this fear as shame, but at its core is an anxiety about being accepted by their audience. Third, and finally, people are afraid of failure. A lot could be on the line – perhaps a grade or a promotion or a sale. Sometimes people prepare so much they work themselves into a frenzy worrying that it will not go well.

All of these are legitimate sources of anxiety, and, even though I am pretty comfortable speaking in public, are all fears I’ve dealt with myself. Learning why you have a fear of public speaking is the first step in managing it. 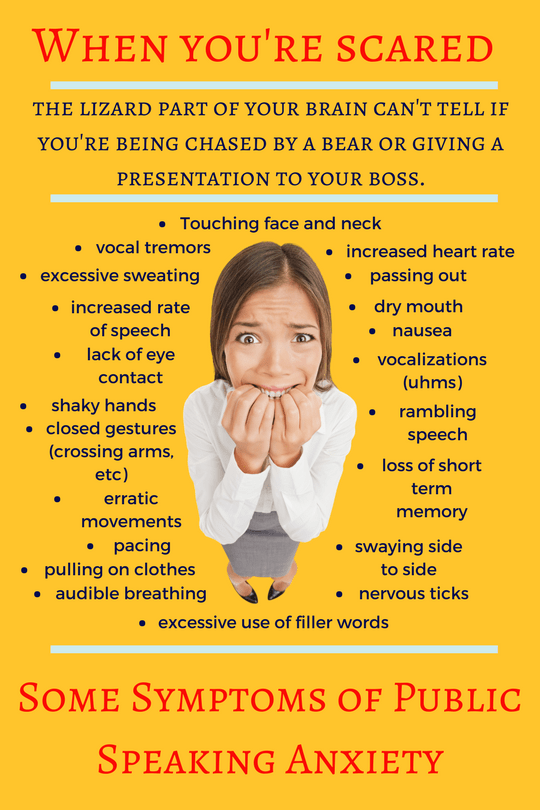 Fear of public speaking is not merely a mental issue. There are physical manifestations of public speaking anxiety. Your heart beats harder and faster, and this causes your voice to tremble and your hands to shake. Your fight or flight response kicks in when you’re afraid, leading to pacing, erratic movements, and speaking at a fast rate. A genuine danger is that the effects of your fear will cause you to give a poor speech – thus becoming a self-fulfilling prophecy. You are nervous to give a bad speech, but then you give a bad speech because you are scared. Here is a strategy for dealing with that fear.

Hide your Fear of Public Speaking

I was once invited to a Halloween party and was under the impression I was expected to dress up in costume. Upon arrival, I discovered that I was the only adult in costume (zombie if you’re curious). Anyone in this situation has two options. You can act embarrassed, maybe even leave, and let it affect how you enjoy the party. The second option is to own your costume. It’s too late to change, and you’re already there, so just walk in like you own the place and have a blast. Audiences give huge respect to speakers that own themselves. You can’t change the way you look, or sound, or the clothes you’re wearing after you’re at the podium – so just own it. Worry about that stuff when you can control that stuff. After you’re on stage, there is nothing you can do about it so just own it.

Rituals can also help you hide your fear. If you watch sports at all, you are familiar with the performance rituals. How a basketball player goes through the same routine before every free throw or a baseball player does the same thing before every at-bat. If you adopt a little ritual, visible only to you, that you use before every practice and every speech, it can help you control your anxiety. It puts your mind in a safe place – you have done this before and this time is no different than any other time. It can even be mental. I have a fear of messing up the first sentence of my speech, so I adopted a ritual of repeating the first sentence in my head and then launching into my speech immediately after. It doesn’t rid me of my fear, but it gets me mentally prepared to face it.

A tactic to minimize your fear of public speaking is to surrender to it. Mistakes are an inevitability. You are going to make a mistake during your speech. Mistakes are not a problem. Reacting poorly to a mistake is a problem. When I’m grading student speeches, I rarely dock points for errors. What I watch for is the response to that error. Does he or she carry on like it was nothing? Or, do they get flustered and allow the mistakes to multiply. If you mess up you have two options. One is to keep on going as if you made no mistake. Ignore it. I call this the Jedi mind trick because the audience forgets the mistake or pays it no attention. The second strategy is to quickly and politely acknowledge and repair the error with a smile and sometimes a laugh, and then continue. I call this surrendering because it happened, and you can’t undo it. All you can control is what you do at the next moment. So surrender to the mistake and don’t let it cost you the next battle. Don’t look back.

The physical manifestation of fear is an opportunity. A few years ago I received a contract to give a series of lectures at a large law firm. The talks were at different offices around the United States. I began my first lecture nervous. I could feel my heart beating in my chest, which is how I know I’m nervous. That speech went great. For the second presentation, having given one successfully, I was not nervous at all. The speech was good but not great. I perform better when I have nervous energy. Constructively transforming nervous energy into your delivery can help you perform better.  Rather than holding back and having a shaky voice, control its release into a powerful vocal delivery. Rather than pacing around the room, control your movements confidently and animated. Controlled energy release gives the impression of excitement and passion – two things that hold the audience’s attention and evoke a positive response. When I can feel nervous energy before I speak, I know it is going to be a great speech.

None of these tactics are easy. They take discipline and practice. But speaking in public is hard. And its even harder when your heart beats out of your chest as you get up to speak. Think about these things when you practice. Practice assuming you’ll be nervous and how you’ll react to those nerves. Hide, minimize, utilize, and you will get through it without anyone knowing exactly how nervous you really are.

This site uses Akismet to reduce spam. Learn how your comment data is processed. 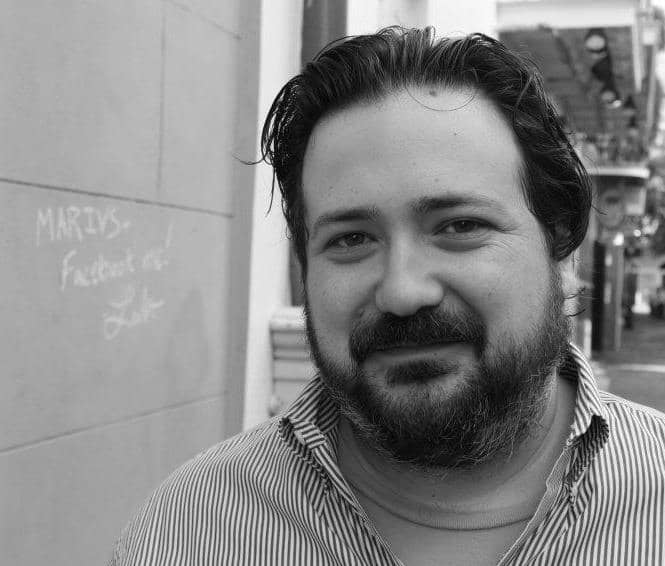 Senior Lecturer, Southern Methodist University
I believe that good public speaking skills are good communication skills. Whether you are making a sales pitch, presenting to your class, interviewing for your dream job, or enjoying a cocktail party, the skills you learn from public speaking will transform your ability to connect with anyone, anywhere. Read more...

Inspire Attention: be the Spotlight of your speech

How to Write the Perfect Speech Introduction

5 Ways to Connect to Your Audience

ABOUT ME
I believe that good public speaking skills are good communication skills. Whether you are giving a sales pitch, presenting to your class, taking a job interview, or enjoying a cocktail party, the skills you learn from public speaking will transform your ability to connect with anyone, anywhere.
Contact me: chris@goodsophist.com
FOLLOW US
© Copyright 2017 - Christopher D. Salinas